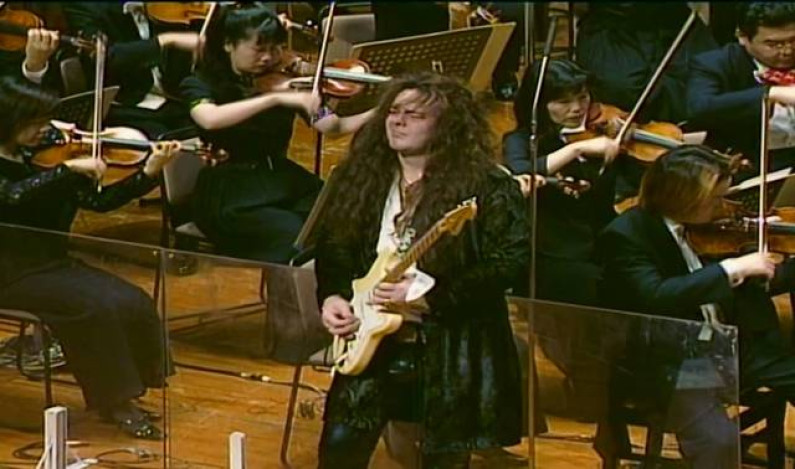 Yngwie Johan Malmsteen (ing-vay mahlm-steen; born Lars Johan Yngve Lannerbäck on 30 June 1963) is a Swedish guitarist, songwriter, multi-instrumentalist and bandleader. Malmsteen first became known in the 1980s for his neoclassical playing style in heavy metal, as well as being one of the key figures who popularised shred guitar.

Malmsteen has stated that Jimi Hendrix had no musical impact on him and did not contribute to his style, but watching the 18 September 1970 TV special where Hendrix smashed and burned his guitar made Malmsteen think, “This is really cool”.

To quote his official website, “The day Jimi Hendrix died, the guitar-playing Yngwie was born”. At the age of 12 he took his mother’s maiden name Malmsten as his surname, slightly changed it to Malmsteen, and altered his third given name Yngve to “Yngwie”.

Malmsteen created his first band “Track on Earth” at the age of 10, consisting of himself and a friend from school on drums. As a teenager, he was heavily influenced by classical music, particularly 19th century violinist composer Niccolò Paganini, and also discovered his most important guitar influence, Ritchie Blackmore. Uli Jon Roth is also cited as a significant influence, as is Brian May.

On 23 November 2010 Relentless was released, the second album to feature Tim “Ripper” Owens on vocals. The US version features a remake of “Arpeggios From Hell” as a bonus track. Yngwie appeared on Late Night with Jimmy Fallon along with Dana Carvey on 3 February 2011 to promote his album.

On 6 August 2011, Malmsteen made another appearance in the United States, playing a rendition of Star Spangled Banner before a game between the St. Louis Cardinals and Florida Marlins at Sun Life Stadium.